How to find the next Google. Or at least a free taco

On Demand Webcast : Making the decision on hosted apps – What’s the risk and reward? 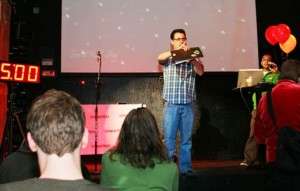 Outside a nondescript warehouse under a San Francisco freeway was a roach coach serving free tacos to an assembled mass of geeks, entrepreneurs, and dressed-down corporate types, all of whom were hoping that in the next few hours they’d witness the unveiling of the next Facebook or Google or Skype.

And now the winner, with a whopping 35.8 percent of the audience votes: Sococo and its “social communications for distributed teams” system. Presumably that second “co” stands for “company”.

It’s not hard to see why this one was a winner with the SF New Tech group: it creates an online office space while leaving you alone in your own physical world. Which is pretty much the perfect scenario for most of those in the room.

When you run the Sococo app on your PC, a map shows a virtual office with little colored head blobs representing people in your company. Virtual rooms work in much the same way as physical rooms: if you are in the room you can hear what is going on, as well as see what is on the whiteboard in that room. If you’re not, you can’t. There are private offices, social areas, conference rooms, and so on. 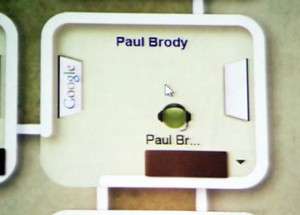 Even just a few years ago, this idea would have sounded ludicrous in the extreme – more Pac-Man than serious collaboration tool – but in a world where many of us have grown familiar with working remotely, in a strange way it makes sense. And Sococo should know – the company is a distributed team and uses its own product to work on its own product, like an online wormhole.

What Sococo is particularly happy about in its latest iteration, however – and what most likely caused it to dominate the SF New Tech voting – was its ability to seamlessly pull in other cloud-computing apps into virtual rooms: Salesforce, Highrise, QuickBooks, SugarCRM, and the like.

There is something oddly compelling about being able to pull all these disparate bits of Web 2.0, Internet 3.0, and Online 4.0 flotsam into a structure that makes sense. Sococo CEO Paul Brody told us that product-development teams are particularly keen on the system.

Of course, it could also be the case that in years to come Sococo will be seen as the epitome of a 2011 Wave of Madness (DotCom Boom 2.0) in which everyone thought an entire economy could be sustained by paying for cloud software that let you share information produced by other cloud software in order to help you run your cloud software company.