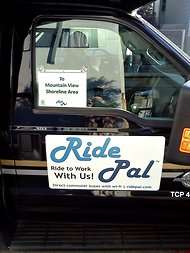 Google, Facebook, Apple and other major Silicon Valley companies have long offered their commuting employees complimentary seats aboard luxurious, Wi-Fi-equipped shuttle buses. The services have become valuable recruiting tools for the companies and a boon for some property owners in neighborhoods close to shuttle stops.

RidePal, a company that recently began a pilot test of its service, would help smaller firms provide workers with business-class commuter shuttles as an alternative to public transit or personal vehicles. Shuttle times and pickup locations are established based on preferences and votes entered by users on the RidePal Web site. Companies enroll to reserve any number of seats on a shuttle and can choose to subsidize any portion of the fare for their employees. Riders sit next to neighbors who work for offices near their own, rather than sitting exclusively with their co-workers.

read the article in The New York Times